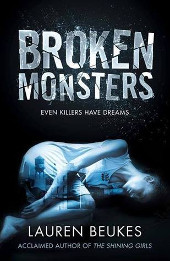 It’s easy to gush praise for Lauren Beukes. Sounds sycophantic but it’s just plain true. First she gave us the wonderfully grim and gritty broken slab of cyberpunk that was Moxyland. Then she went all weird animal spirit and missing persons with Zoo City. Then, just to show off, she went and wrote Shining Girls, one of my favourite urban fantasy/horror/crime stories ever. In fact my girlfriend just finished reading the Mandarin translation, taking a good while to complete it due to it being “too exciting to read before sleeping”. So when I heard her latest, Broken Monsters, had hit the bookshelves I was into the virtual library like a shot and racing to my ebook reader with a brand new bundle of 1s and 0s.

And my first thought was, “Why am I reading a police procedural novel?”

Now don’t get me wrong, I’m a big fan of crime fiction done well. It’s just that based on past form I was expecting something altogether more fantastic than what seemed to be on offer here. Broken Monsters kicks off in heavy disguise, looking for all the world like a more artistic Silence Of The Lambs. A twisted killer with a penchant for animals and art is stalking the streets of abandoned and broken Detroit. Earnestly trying to both track down the culprit while caring for an increasingly wayward teenage daughter is Detective Versado and a wonderfully fleshed-out assortment of Detroit’s finest.

If there was nothing more to Broken Monsters than a cat-and-mouse then there would be little to lift it above the ranks of airport crime novels but this is Lauren Beukes. The narrative is fragmented into a handful of different viewpoints. Not only do we get to ride along with Versado, her daughter and the killer but we get to experience the viewpoint of some other spanners in the works. First there is the washed-up journalist/author trying to get his career back on track after burning every bridge he could lay his hands on. Thanks to his newly-acquired and ever-so-hip and young DJ girlfriend he’s soon tuned into ‘new media’ and the horde of eyeballs waiting on the other side of a YouTube channel. And then there is the human wreckage of Detroit, represented by a band of homeless friends scraping a living by scouring abandoned buildings for anything salvageable. Inevitably their paths collide in a rather spectacular manner.

One of the key thread in Broken Monsters, alongside the ode to Detroit and the countless other magnificent living ruins in our midst, is the exploration of media sensationalism and the potential for our fascination and hunger to fuel the darker sides of our natures. This isn’t meant in the sense of the patently ridiculous ‘video games and horror movies will turn your children psycho’ trope. Rather it’s about the very real violence we gorge ourselves on every time we turn on the news or open a paper. Living in Taiwan this strikes a very real chord, being surrounded by news stories of teens and young adults going on knife-wielding rampages. Every murder is pored over in sickening detail by every news channel. The pictures run constantly: the bodies; the wailing family; the scornful politicians; the shocked friends. And yet the carnage continues at an ever greater pace. Makes you think…

And of course it wouldn’t be Lauren Beukes unless there was something going on behind the scenes. As soon as you get the sense that this is no ordinary killer, not just a man with a simple screw loose, the novel is elevated from a particularly gripping thriller to an unnerving almost-ghost story, one which refuses to allow simple categories to pin it down. It’s tempting to label it as horror but it is so much more because the horror comes from revealing what is worst about the world around us rather than relying on the unreal elements to bring the dread. Elements from her previous two books are very obvious here (indeed she admitted that she was originally worried that she was just re-writing Shining Girls) but they are melded together with crucial new strands which make this book a logical progression from what she has accomplished before. Shining Girls managed to gather her a pretty sizeable following but hopefully this will be the title which will lead to the acclaim she deserves. 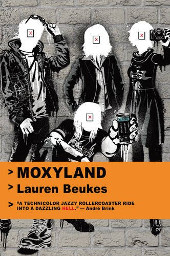 Set in South Africa a mere few decades hence, Moxyland is an intoxicating tale of greed, rebellion, betrayal, hedonism and hope, all wrapped up in a smothering blanket of state control and corporate oppression. This future world is a bleak, dismal place. Despite the promises of ever-advancing technology and growing economies the gap between rich and poor constantly widens. Big business controls the planet, plastering every surface with advertising and holding the population to ransom through a Kafkan legal system, all the while aided and abetted by a government which views the majority of its citizens as near-worthless commodities.

The action follows four distinct narratives, each interlinked with the others and all spiralling towards the same inevitable conclusion. First up is Toby, an egotistical drop-out living on the cash advances of his estranged mother, blowing every penny on designer clothes and drugs and documenting every step for his blog.  His friend Tendenka is an activist, alarmed at the increasingly fascist nature of his adopted country and leading ever-more daring actions against the powers-that-be at the behest of the mysterious *skyward. Occasionaly aiding and abetting Tendenka through her access to certain corporate ivory towers is Lareto, a ruthless and ambitious corporate executive who views others a mere stepping stones on her journey to power. Finally we have Kendra a young artist who has transformed her entire body into a corporate billboard – nanotech implants give her flesh a green hue and render her addicted to her sponsor’s soft drink with the bonus of enhancing her natural physical abilities.

Moxyland drags these four characters together as Tendenka’s protests against the government advance from simply reprogramming billboards to sabotaging art exhibitions and beyond. His earnestness in acheiving his aims is matched only by his lack of comprehension of the potential outcomes. The threat de jour is disconnection, with offenders being cut off from any services requiring identification, i.e. nearly everything. Prior to outright disconnection comes ‘pacification’, with the police forces able to deliver massive and extended electrical charges to any miscreants via their mobile phones. But Tendenka doesn’t understand just how far the authorities will go to preserve order and protect their corporate backers. To Toby this is all a joke, something to pass the time until he decides which (if any) direction to take with his pleasure-soaked life. Kendra is dragged into all this by Toby, becoming the unwitting target of his affections. Lareto sits safely above the other three. Safe from such threats as disconnection she maneuvers her way through the world of business politics, dispensing favours to old friend Toby at Tendenka’s request. Which is of course the request of *skyward. And just who is *skyward anyway?

The debut novel of Lauren Beukes, whose wonderful The Shining Girls I reviewed at the Mountains Of Instead, Moxyland is a beautifully nihilistic portrayal of a world gone wrong. With its roots sunk firmly in the cyberpunk genre its gritty streets festooned with technological marvels bring to mind the very best of the genre, from Gibson to Dick to Stephenson. The concept of a future inhabited by a select few haves lording it over the legions of have-nots is well-worn but it’s seldom brought to life as vividly as Beukes manages. You can almost feel the grime under your fingerprints as you read thanks to her obsessive attention to detail and wonderful talent for fleshing out characters.

There is a true warmth at the heart of this novel, which may seem a surprise as it is drenched in despair, violence and deprivation from the outset. Make no mistake, there are no happy endings in Moxyland. This is no fairy tale and Beukes pulls no punches in delivering her warnings about the dangers of creeping corporate powers. And the great tragedy of Moxyland is that despite the oppressive environment which they inhabit, the eventual outcome is the result of her characters’ own flaws. Hubris, greed, naivete, narcissism – they all pile on top of each other until the whole world comes crashing down.

It’s no mean feat to craft an addictive page-turner from such apparently hopeless premises. However, and remember that this is a debut, Lauren Beukes has managed to do it. Moxyland is an effortless read, yet one which constantly forces you to think, to reassess your opinions and to challenge your ideas. It’s bloody lovely. And if you’ll excuse me, I’m off to soak it all in again.

Silly me, I keep forgetting to link to the reviews which I post over at Splendibird’s blog. Oh well, time to make up for lost time. The most recent was Lauren Beukes exceedingly original and well-paced time-travel thriller, The Shining Girls. Set in an immaculately recreated Chicago it tells the tale of Kirby Mazrachi, a gifted young girl who is visited by a mysterious stranger as a child. Years later, the incident totally forgotten, she finds herself savagely assaulted and left for dead by the same man, aged not a single day. Disturbed in the middle of his attack, he disappears and is never heard of again, not until a grown Kirby starts piecing together various seemingly unconnected murders around the Chicago area spanning back almost a century.

Go check out the full review at Mountains Of Instead!

Tagged as lauren beukes, mountains of instead, the shining girls