Before we start, try a little experiment. You’re going to need some walking space, nothing more. Start walking, get a nice steady pace going. Now, try to find the answer to this sum: “2+2=?” Did you manage it? Unless you’re the kind of mouth-breather who has trouble manoeuvring a knife and fork at the same time then it should have posed no problem. Now, get your stroll on again. Try this one on for size: “23×42=?” Those of you with exceptional gifts for mental arithmetic may have managed it, for the rest of us mere mortals it caused us to at least break our stride and probably stop altogether. In fact, unbeknownst to us our heartrates increased and our pupils noticeably dilated.

In Thinking, Fast And Slow Nobel laureate Daniel Kahneman gives us a guided tour of two distinct mental systems we constantly and unconsciously use for processing different kinds of data. System 1 gives us an up-to-date picture of our surroundings, dealing with easy problems and reacting at lightning speed – you might be tempted to call it ‘instinct’. System 2 on the other hand is concerned with the trickier situations and requires a great deal more energy, hence the discomfort caused when attempting the second calculation. It’s more aligned with what we’d call our logical and rational selves, as opposed to the more emotional character of System 1. Though we are aware of neither in our daily lives, nor of the switching between them, they guide our every action and, as Kahneman takes great relish in demonstrating, lead us into all manner of cognitive biases.

Kahneman orders his book into a series of discussions on the various heuristics, or mental shortcuts, which System 1 will take in order to keep us comfortable. It turns out that we always prefer to be lazy, no matter how diligent we profess to be. System 1 will always take whatever shortcuts it can to minimise effort, response times and anxiety. (And don’t worry if it sounds like we have two autonomous homunculi controlling our lives, it’s just easy shorthand to help us understand our mental operations.)

One of the easiest to demonstrate is the availability heuristic. A wonderful yet grisly  example of this heuristic at work is the United States immediately following the 9/11 attacks (taken from Dan Gardner’s wonderful Risk: The Science And Politics Of Fear). The media during that period was pushing one transport-related story only – planes are bad. The images of the burning towers were everywhere you looked. Everyone knows the death toll, the 3,000 who lost their lives that day. Few are aware that in the following year over half that number again died on America’s roads as a direct result of choosing to drive instead of fly.

In the terminology of Thinking, Fast and Slow, this was an error of System 1. It was asked the question, “Should I fly or drive to this meeting?” but instead of passing the work on to meticulous but labour-intensive System 2, it substituted another question instead. It asked “What information about flying is close to hand?” The answer was obvious, yet the information to hand failed to mention that flying remained a far safer option than driving. The results of 1,600 such errors speak for themselves.

Throughout the rest of the book Kahneman details several other such heuristics which lead us down alleyways of faulty logic. The framing heuristic determines how a slight and logically insignificant change in the wording of a statement or question can have massive differences in our reactions to it. Would you prefer a medical treatment which would give you a 90% chance of living or one which gives you a 10% chance of dying? Depends which system is at work. There is also loss aversion, a remarkably powerful heuristic whose operation results in the stunning and repeatedly demonstrated fact that optimists are healthier, happier and live longer that pessimists. (Unfortunately reading this made me even more of a pessimist. Thanks Daniel.). By combining studies of loss aversion, overconfidence and our tendency to simplify the world around us, Thinking, Fast And Slow manages to unite all manner of previously inexplicable human behaviour under one relatively simple explanation.

Don’t worry, though, it’s not all bad news. Kahneman is at pains to point out that for the vast majority of our lives Systems 1 and 2 perform their assigned tasks immaculately. Our continued existence is testament to their efficacy. The main point he wishes to drive home is that with some effort we can become more aware of their failings. With this in mind we can hope to reduce our own susceptibility to cognitive biases, although as a disclaimer he does note that it is far, far easier to notice these shortcomings in others and hence this book is aimed more at ‘gossips and critics’. Despite this warning, anyone interested in skepticism, critical thinking and psychology should devour this book and start spreading the word.

Then start annoying their friends with calls of “Ha, your System 1 is a jerk!”.

A World Of His Own 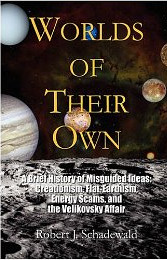 Review: Worlds Of Their Own by Robert Shadewald (Xlibris, 2008)

Creationists. Flat-earthers. Conspiracy theorists. Perpetual-motion inventors. The world is full of kooks, crackpots and outright frauds. Some are harmless, some dangerous but all share a common ground in their delusions and Bob Schadewald made it his life’s mission to study, understand and even befriend them. Unlike the unfair caricature of the shrill, antagonistic skeptic with which most non-believers are portrayed these days, Schadewald felt genuine affection for these people, although heaped deserving scorn on many of their ideas. Worlds Of Their Own is a posthumous collection of some of his better-known articles, chronicling his adventures from the last ever interview with Immanuel Velikovsky through his ejection from the Flat Earth society for promotion of heretical, spherical ideologies.

The book begins with a look at the holy grail of many scientifically-illiterate engineers – the perpetual motion device. In these times of climate change and looming oil scarcity, the possibility of a device allowing unfettered access to energy from the softest initial push seems more tempting than ever. Through the centuries many have tried and as Schadewald scrupulously documents have succeeded in swindling substantial funding from would-be investors. However, all these attempts were doomed to run afoul of their arch-nemisis, the laws of thermodynamics. Worlds Of Their Own examines several such devices, their histories and the characters of their inventors, before inevitably revealing the hidden power sources which made the impossible possible. Schadewald leaves us in no doubt that physics does not provide free lunches, yet manages to do so without appearing condescending towards those who merely misunderstood the rules of the game. It’s this compassion which makes the compendium such a compelling read rather than just another fish-in-a-barrel frenzy.

A substantial portion of the book consists of his decades-long love affair with one of the more bizarre beliefs still current in the world, namely that the earth is flat as opposed to spherical. Zetetic geography dictates that the world is either a disc, with the north pole at the centre and the impassible ice barrier of the Antarctic protecting the rim, or a rectangle akin to a classic Mercator projection with the stars draped over it like a tent. The title ‘Worlds Of Their Own‘ never seems more apt than when applied to this particular branch of pseudoscience. In a treatment spanning several overlapping articles, Schadewald details the varying guises which flat earth theory ha taken over the years and spends some time investigating its biblical roots. It’s a common cry among pseudoscientists and conspiracy theorists alike that “scientists thought the world was flat until a few hundred years ago!” Ahem, history begs to differ. The sphericity of our planet was well-known to the Greeks but this knowledge became buried under the stifling influence of religion until science again began to flourish in the Renaissance.Schadewald’s most personal recollections come to the fore in this section. Recollecting his membership of the Flat Earth Society as a mole he seems full of genuine warmth and affection for the eccentrics with which he was surrounded. At no point does he deliver any withering put-downs or vaunt his stronger grasp of scientific principles or historical research. Instead he simply observes and questions, seeking to understand the inner workings of these belief systems with passion and a strange kind of respect.

He is somewhat less generous, I’m happy to say, when it comes to the issue of creationism. He attacks their senseless doctrine with no small amount of ire and recounts in gory detail the insidious transition from Creationism to Intelligent Design. Schadewald’s attitude, much like my own, is that if a belief is harmless then let it be. This is far from the case with creationism and he recognises it, switching clearly into attack mode. He spears the thoroughly biblical roots as well as ridiculing the laughably weak pseduoscientific sheen currently being applied. I could happily have read a book-length treatment of this issue and would love to have heard his take on more recent developments like the Kitzmiller/Dover trial.

The highlight for me was his chapter elucidating the differences between science and pseudoscience and particularly the Galileo complex so beloved of cranks (“They didn’t believe Galileo at first either!”). This is illustrated in a case study of Immanuel Velikovsky and Alfred Wegener. Velikovsky proposed, against all evidence, that the earth’s history was profoundly influenced by the erratic actions of a comet ejected by Jupiter which later became the planet Venus. His theory, seeking to explain biblical events such as the sun standing still and the flood, was universally panned, leading to the infamous ‘Velikovsky Affair’. Wegener, on the other hand, upset geological orthodoxy by proposing the theory of continental drift. Despite at the time having no formal grounding in geology his theory, initially rejected outright by the scientific community, was eventually refined and accepted as the best fit for the facts. Why the difference? Schadewald’s understanding of the scientific method and the pseudoscientific mindset really shine through in his explanations.

Despite being inevitably a little fragmented, not to mention out of date, Worlds Of Their Own is a wonderful reminder of why it is always important to think. Why we need to keep our guard up against the advances of the anti-rational. Schadewald, like Carl Sagan, is one of those voices we sorely miss in a world bursting at the seams with New Age pseudoscience, religious fundamentalism and conspiracy theories. Would that he were still around to add his weight to the resistance.